How five adult-entertainment stars tackle their finances in the age of online sex work.

Melrose Michaels sits on her bed wearing a red lingerie set, smiling into the camera as if she were about to film a signature striptease. “Make sure you enjoy yourself,” Michaels says, smirking as she leans into the camera and gives viewers a wink. “After all, that’s what we’re here for.”

But Michaels isn’t just a cam girl — she’s a businesswoman and teacher, logging on to help aspiring sex workers to make their mark in the cutthroat adult-entertainment industry.

Michaels has amassed nearly 83,000 followers on her FanCentro profile, a website that allows adult film performers to distribute content to fans via their private social media accounts on a subscription basis. Since joining the platform, Michael’s, 29, has become the site’s most popular model.

The adult-entertainment star’s FanCentro subscribers aren’t alone. The cam girl has garnered hundreds of thousands of followers across platforms like Youtube, Twitter, Instagram and Snapchat, and as a result, has raked in more than $20,000 per month on average since the COVID-19 pandemic began.

“My small business is a one-woman show. When it comes to things like creating content, producing content, editing content, publishing content, and doing marketing and sales, it’s all me,” Michaels said in a phone interview. “My earnings reflect that of a very successful medium-sized business. But because it’s sex work, that’s not taken seriously.”

Navigating the murky waters of finance when it comes to sex work can be a challenge. Historically, those wanting to enter the adult-entertainment industry have relied on word-of-mouth pieces of advice for things like service pricing, screening clients and whether or not to carry cash on the job. And while the industry can be lucrative, for Michaels, along with many other sex workers, more money can also mean more problems.

Looking back on her career in sex work, Lola Davina wishes she had paid more attention to the business side of the industry when she started.

For inexperienced sex workers like Davina once was, the underground world of adult-entertainment can be daunting.

“A lot of people are very fearful, especially those who are doing escorting or doing work that is not fully above ground,” Davina said. “Because of a lot of fear, it’s easier to hide in the shadows than it is to try and reach out to find professional advice.”

Centro University is trying to change that.

FanCentro launched its 10-part educational training program, ‘Centro University,’ in October of 2020. Kat Revenga, vice president of marketing, said in a phone interview that the team at Fan Centro was inspired to create the free video series after they saw an 80% spike in online traffic after the coronavirus forced sex workers to go digital. 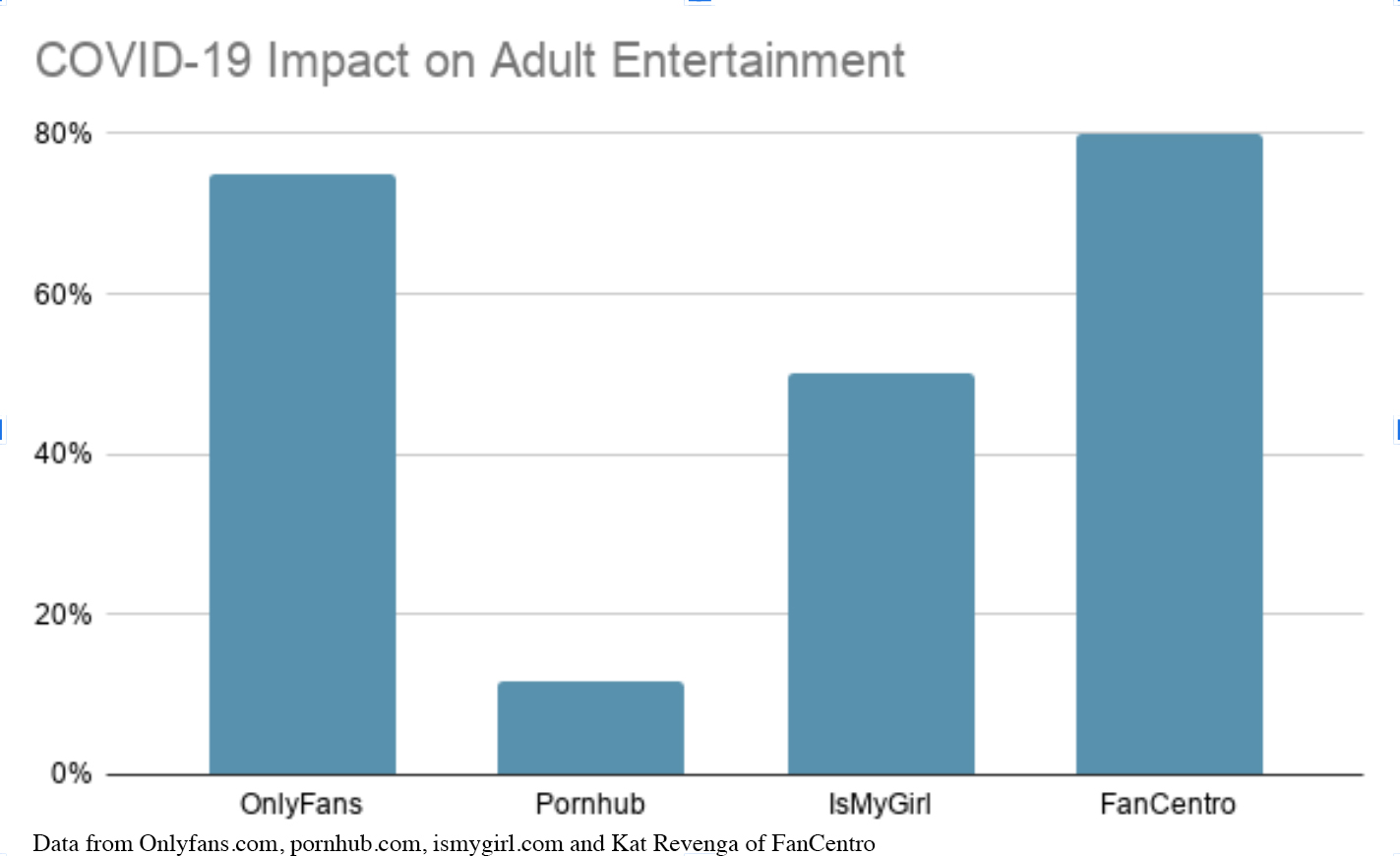 As the pandemic pushed sex workers online, the competition on the web increased tenfold. Unlike traditional in-person sex work like stripping or escorting, Revenga said that the key to succeeding in the new, competitive era of the digital adult-entertainment industry is to own your product, hone your business background, and learn when it’s time to call in financial professionals to help.

‘You’ve got to be yourself, but sand off the rough edges’

For Michaels, who was hired by FanCentro to develop the program, diversifying one’s skill set is the recipe for success.

“You have to have the balance of being really artistic and an insightful creator,” Michaels said. “Then having the other side of it where you’re also an entrepreneur and you’re always looking for wars to improve and grow your business.”

To do so, Centro University has shaped its approach to the adult-entertainment industry by helping social media influencer-hopefuls to develop a unique personal brand that will stand out to fans.

Maggie McNeill, a semi-retired escort and author of the blog The Honest Courtesan, said in a phone interview that in any sort of entertainment industry, a personal brand is key.

“A politician presents himself as a package. If you like an actor or actress and the kinds of roles they play, it’s because they have different kinds of personas. Someone like Johnny Depp would play the same kinds of roles as Mel Gibson, Will Smith, or Sandra Bullock,” McNeill said. “What [sex workers] are selling is a personal thing, and it’s a personal interaction.”

Because sex work is so personal, McNeill said that it’s important for models to be authentic but keep in mind that they are providing a form of entertainment. “It’s much easier to maintain a brand if it’s close to the truth. You’ve got to be yourself, but sand off the rough edges,” said McNeill.

“Shaping your brand is how you manage that attention, either to attract or repel the people who are going to pay attention to you and want to be your client,” said Davina.

The Recipe for Success

Revenga, who has worked in the adult industry for more than nine years, has seen a lot of budding sex workers fail because of a lack of knowledge and access to resources regarding the business side of the field.

Revenga, who has worked in the adult industry for more than nine years, has seen a lot of budding sex workers fail because of a lack of knowledge and access to resources regarding the business side of the field.

“Imagine if tomorrow, I wanted to open a bakery. Just because my cookies are good doesn’t mean I don’t still have so much to learn in order to make that business successful,” said Revenga.

Centro University teaches aspiring sex workers to monetize the personal brand they’ve developed during the first section of the video course by creating things like premium Snapchat accounts or a line of merchandise that fans can purchase.

For Michaels, long-term financial planning is just as key for success in the sex worker industry as the sex itself.

“Successful people come into the business thinking ‘Okay, how do I market myself better? How do I get more traffic to my site?’ because if no one comes into the site you’ve built you still aren’t successful,” Michaels said.

“As a general rule, sex workers tend to be a little bit more secretive and private, but that cuts off traditional pathways in wealth in terms of investing, buying homes, and starting businesses,” Davina said. “It’s that knee jerk reflex toward secrecy that can be very destructive in terms of generative long term wealth.”

“There are four people you need to get on your team,” McNeill advises. “You need to find yourself a good lawyer, a good doctor who will help you take care of your health without making stupid accusations, a good accountant, and a good financial adviser, who can say, ‘here’s what we should do with your money.’”

For Alice Little, a legal escort in Carson, City Nevada, getting an education in finance from experts is important for long-term prosperity in the field. “Those skills will allow you to invest wisely, set a budget for your personal and business expenses, and allocate appropriately for taxes,” Little said in a phone interview.

But navigating the business side of sex work isn’t the only hoop that adult-entertainment performers must jump through when posting content online. The SESTA/FOSTA acts passed by the federal government in 2018, and is meant to crack down on the digital sex trafficking of minors. However, for consentual sex workers, the the bill isn’t exactly what it might seem.

Sex workers have rallied against the bill, saying it is a first amendment violation and a piece of legislation that keeps them from posing content online. Because of SESTA/FOSTA, the owners of online domains can be held legally responsible for the content their users post, which has left many owners to close down their sites out of fear of legal repercussions.

In addition, advocates for sex workers have pushed for legal and safe online payment methods like Venmo or PayPal— understanding this element of the industry is crucial, especially when it comes to tax season.

For Michaels, the difficulties of completing taxes as an adult-entertainment star is personal. When the actress began camming, she assumed taxes were being withheld from the paper checks she would receive weekly from the host platform; she was mistaken.

“I had made six figures, and at the end of the year when taxes came, I had nothing left to pay them,” Michaels said. “I spent almost eight years trying to come back from that nightmare.”

Upon completing FanCentro’s Centro University, graduates can expect to be well versed in how to build a successful and sustainable personal empire in the world of adult-entertainment. However, as a result of the stigma attached to and the criminalization of sex work, Davina said that empowerment is just as important as financial literacy when it comes to facing the mainstream business world.

“I think that it’s one thing to be empowered and it’s another to be powerful, so being in control of what you’re doing and then making powerful moves in regards to that is where the strength comes that then strengthens our community long term,” said Michaels.

As Centro University encourages sex workers to become informed entrepreneurs, in her training videos, Michaels stressed the importance of owning one’s sexuality as a means to combat the stigma associated with the industry.

“People always ask me ‘Why would you do this kind of work? You were so successful before going into this and you don’t need to do this,’” said Michaels. “But for my whole life, since I was about 14, I’ve been sexualized without my consent. Every day, wherever I go, whatever I’m wearing. This is the one industry where we can take power over that and make a profit on it.”