At the beginning of March, opera singer Kevin Courtemanche was nearly done preparing for a role at the Lyric Opera of Chicago. Room rehearsals had finished, and Courtemanche had flown home to New York for a two-week break before the production’s final stage rehearsals began. Then, the coronavirus pandemic struck, and Courtemanche’s career changed completely.

“I literally found out Friday the 13th of March that I was no longer going to be an opera singer in the way that I had been doing,” Courtemanche said in a video interview. “We got notice that there was going to be a video meeting. I got an email right after that saying we’re suspended and we’re done for the season.”

Courtemanche shares the experience of regular performances suddenly ending with countless other musicians working around the Princeton area. New Jersey and New York comprised the epicenter of the pandemic’s initial surge and imposed strict lockdowns in March in a bid to contain the spread of disease. Live music performances, with their large crowds and close-quarters contact, were among the first events to be cancelled, leaving musicians without their main source of income, according to statistics from the National Independent Venue Association. 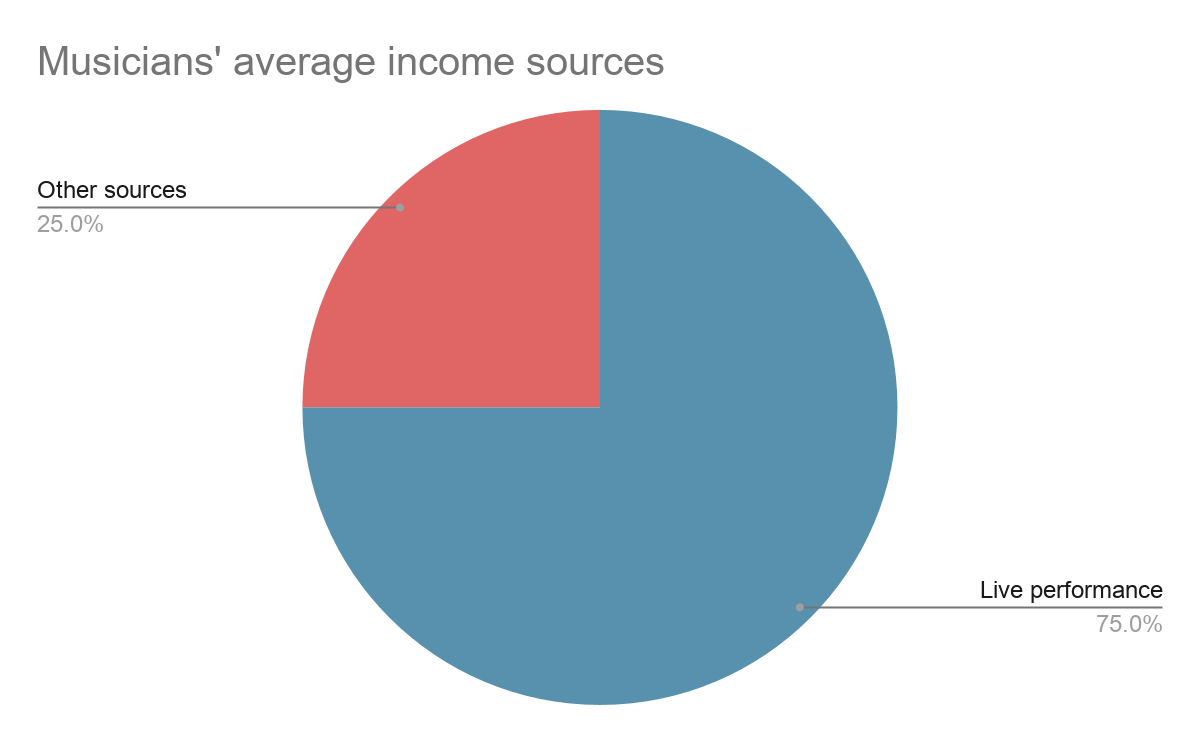 Outdoor performances have resumed since the pandemic’s initial lockdowns, providing musicians with much-needed income. As Covid case numbers rise nationwide, however, another shutdown could be on the horizon, bringing financial hardship for musicians.

Before the pandemic, New Brunswick-based jazz guitarist Ilan Eisenzweig relied on teaching private lessons and playing gigs at local clubs and restaurants for income. When businesses were forced to close at the beginning of March, Eisenzweig lost half of his normal earnings, he said.

“By mid-March, any work that I had was totally cancelled,” Eisenzweig said in a phone interview. “I maybe had one outdoor gig from March to June, and I didn’t know anyone who had any gigs.”

Keyboardist Alexander Moravcsik said he had been playing at several bars and restaurants around central New Jersey before the pandemic started. When the state went into lockdown, he lost the income that had previously helped him afford to study at Princeton University.

“When Covid started, there were no gigs, I mean everything shut down,” Moravcsik said in a phone interview. “People were playing on their balconies, people were doing live-streaming, but there were really no gigs because nothing was open.”

Moravcsik said that he had not needed to seek unemployment benefits but that many local musicians had faced difficulty in accurately representing their income from performances when applying for benefits. According to Moravcsik, the gig economy does not readily compare to the stable salary that unemployment benefits are designed to replace.

“A lot of our money comes from tips, and it’s honestly more common to have cash payments than checks,” Moravcsik said. “It’s much harder to prove that kind of income. I haven’t heard of any musicians in my group using government aid.”

Courtemanche said that he had succeeded in qualifying for unemployment benefits in New York, but only after a seven-week struggle to contact the New York Department of Labor. According to Courtemanche, the problem lies in the type of taxable income musicians typically receive.

Courtemanche said that after more than a month of frustration, he filed a new claim pretending that he had not filed previously. Finally, he received the minimum weekly benefits allowed in New York.

According to Kevin Erickson, director of Future of Music Coalition, a nonprofit that advocates for legislation supporting musicians, the current unemployment benefits system was not designed to work with musicians. Unemployment measures established in March under the Coronavirus Aid, Relief and Economic Security Act make it difficult to allocate aid to workers who earn money both as payroll employees with W-2 wage and tax forms and independent contractors with 1099 forms, Erickson said.

“It’s very common that musicians patch together both W-2 and 1099 income, and so states don’t know how to accommodate that,” Erickson said. “Musicians and other kinds of workers that have this hybrid income have found themselves locked out of any unemployment support.”

The Act passed the House of Representatives, but it has not yet passed in the Senate, which Erickson said will resume negotiations about the measure during its few remaining work days of the year.

“I’m not giving up hope that something’s going to happen this term,” Erickson said. “It’s desperately needed, long overdue, and in the meantime, it’s just been really, really difficult. People have endured a year of this, and some of them have only ever gotten the $1200.”

Since the early lockdowns of the pandemic’s initial surge, Moravcsik, Eisenzweig, and Courtemanche have all resumed performing in some capacity. Moravcsik and Eisenzweig both said they had begun playing outdoor gigs around New Jersey during the summer, and Courtemanche said he had recently appeared in an outdoor performance of a short opera in Princeton.

Eisenweig said he usually feels confident about the well-being of performers and patrons at his regular gigs around central New Jersey. He is skeptical, he said, about the safety of playing in enclosed tents.

“They’ve all been really good, in my opinion, about social distancing, and they’ve been pretty strict with masks,” Eisenzweig said. “The tent thing, it is open air, but I start to wonder how safe it is.”

Moravcsik said the experience of playing at weekly concerts in a tent outside the Stress Factory comedy club in New Brunswick is similar to that of pre-pandemic performances. However, he said the concert series is unlikely to last much longer.

“It feels just like a regular gig besides the fact that when you’re not at your table, you’re supposed to wear a mask,” Moravcsik said. “But I imagine that these cold-weather months and the surge that is certainly going to cause another shutdown at some point will make it more difficult.”

Erickson said the possibility of another shutdown demonstrates the need for government aid packages, such as the Save Our Stages Act, to pass Congress and become law. The SOS Act, which has been incorporated into the HEROES Act, would provide at least $12 million of grant money to independent music venues, 90% of which are predicted to go out of business by mid-2021, according to data from the National Independent Venue Association.

“This illustrates the precarity that music workers are always in,” Erickson said. “Venues opening in limited capacity, all the innovation that’s happening is great, but it’s only going to be a drop in the bucket compared to the extent of the damage.”

Musicians interviewed said a government relief package would need to include generous fiscal aid in order to best protect them and the venues that support them.

Eisenzweig said that a relief bill would need to include large stimulus checks or a significantly expanded unemployment benefits program to help people afford to quarantine.

“There should definitely be a way to pay people to stay home,” Eisenzweig said. “That way you’re going to stop the spread much more easily, and you’re not going to make people broke by forcing them to stay home. You’ll give them an incentive to stay home.”

According to Courtemanche, the government should be careful not to compromise on coronavirus aid measures for the sake of avoiding debt. Ensuring workers’ safety should be the first priority, he said.

“I would err on the side of providing as much government relief as possible,” Courtemanche said. “We need to prop up the states, we need to make sure public transportation keeps running, we have to make sure that people are getting enough food.”

Moravcsik said he doubts that a measure like the HEROES Act can pass during the tumultuous end of Donald Trump’s presidency, when issues surrounding the transition of power could take precedence over government relief packages.

“It seems like the current president has generally stopped governing, and I think the concerns of gigging musicians are not among the highest priorities,” Moravcsik said. “I really can’t envision what an aid package would look like. I just don’t think there will be one anytime soon.”

According to Erickson, the HEROES Act may be unlikely to pass before 2021, but it is still a possibility. The fate of the bill ultimately rests with Senate Majority Leader Mitch McConnell, who can decide whether the Act will be brought to a vote in the Senate, he said.

“For right now, we’re all dependent on Mitch McConnell’s ability to be reasonable,” Erickson said. “Putting it diplomatically, it’s hard to find a lot of confidence that we’re going to be able to get it done.”